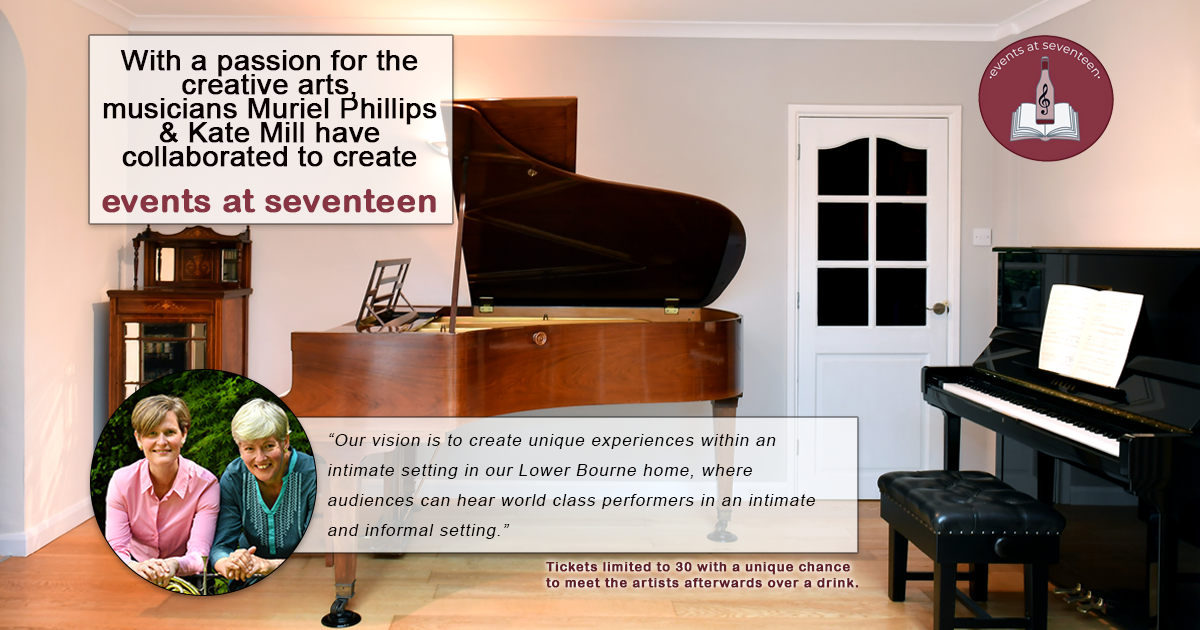 With a passion for the creative arts, musicians Muriel Phillips & Kate Mill have collaborated to create events at seventeen. Our vision is to create unique experiences within our Lower Bourne home, where audiences can hear world class performers in an intimate and informal setting.

​We are excited to be welcoming some of the most established artists in the UK & abroad, including musicians, authors and a wonderful wine expert.

Tickets limited to 30 with a unique chance to meet the artists afterwards.

Sarah Fox is one of the leading English sopranos of her generation. We are thrilled to be hosting her in our Lower Bourne home, where she will perform with her long time friend and accompanist, Muriel. Tickets £35 each including a drink afterwards and are available online at http://eventsatseventeen.co.uk

The Tale of the Oyster      Cole Porter

Waltz of my Heart      Ivor Novello

Born in Yorkshire, Sarah Fox is one of the leading English sopranos of her generation. She was educated at Giggleswick School,London University and the Royal College of Music. A former winner of the Kathleen Ferrier Award and the John Christie Award, she is also an Honorary Fellow of Royal Holloway College, London University. She is equally at home in many musical genres including opera, folksong and musical theatre.

Roles at the Royal Opera House, Covent Garden, include Micaela in Carmen, Asteria in Tamerlano, Zerlina in Don Giovanni and Woglinde in Der Ring des Nibelungen. Other highlights include Asteria in Munich and Barcelona (opposite Domingo); Zerlina at Glyndebourne and in Cincinnati; Woglinde for Salzburg and Aix-en-Provence Festivals; Susanna in Le nozze di Figaro for Glyndebourne and The Royal Danish Opera; Ilia in Idomeneo with De Vlaamse Opera; and Mimi in La bohéme for Opera North. Other roles include Servilia (La clemenza di Tito) and Ellen Orford (Peter Grimes).

Sarah’s concert career takes her worldwide. Highlights include engagements in Denver, Hong Kong, Melbourne, Minneapolis, New York, San Francisco, Tel Aviv and Tokyo, as well as tours throughout the UK, Europe and Scandinavia. She works with many of the world’s leading orchestras including the Academy of Ancient Music, Berlin Philharmonic, City of Birmingham Symphony Orchestra, Colorado Symphony, Concerto Cologne, Dallas Symphony Orchestra, Gulbenkian Orchestra, the Halle, Melbourne Symphony Orchestra, Minnesota Orchestra, Oslo Philharmonic, Orchestra of the Age of Enlightenment, the Philharmonia and the Vienna Tonkünstler Orchestra with conductors including Elder, Hickox, Mackerras, Manze, Petrenko, Rattle and Tovey. She has appeared several times at the BBC Proms, the Edinburgh Festival and the Three Choirs Festival and is a regular guest with the Classical Opera Company and at London’s Wigmore Hall where she recently performed with Graham Johnson as part of their 120th Anniversary.

Sarah sings frequently with John Wilson and his Orchestra and has performed concerts with Rufus Wainwright throughout Europe and Hong Kong. She is a regular guest on BBC Radio 2’s ‘Friday Night is Music Night’ and was a judge on the second series of BBC TV’s ‘The Choir: Sing While You Work’ with Gareth Malone.

Muriel began her musical education in Bedford, England. She won a Junior Exhibition at the age of eleven to the Royal College of Music, studying both the Piano and the Violin. She later studied Piano at the Royal Northern College of Music and concurrently took a Music degree at Manchester University (the Joint Course).    On leaving the RNCM, Muriel was awarded the Clifton Helliwell Memorial Prize.  Muriel returned to the Royal College of Music in London as a Postgraduate Accompanist and won several major accompaniment prizes, becoming a Wall Trust Scholar. At the RCM, she gained her ARCM (PG) and was later awarded a ‘Geoffrey Parsons Junior Fellowship in Keyboard Accompaniment’, studying with John Blakely.

She has performed widely as an accompanist in both the UK and abroad.  Concert venues have included London, Italy, Switzerland, Norway, India, Sweden, Egypt, Cyprus and Berlin. Muriel accompanied James Rutherford in their Wigmore Hall debut and has also performed in recitals on cruise ships.  She has performed in the presence of HRH the Prince of Wales on a number of occasions and accompanied singers at a dinner commemorating Placido Domingo’s twenty-five years at the Royal Opera House.  Muriel is in demand as an accompanist for recitals, competitions, choral societies and a wide variety of audition work. She was Head of Piano at Charterhouse School in Surrey and taught Piano at Eton College in Berkshire.  She has also taught and given masterclasses in the USA.

Muriel has been an ABRSM (Associated Board of Royal Schools of Music) Examiner for many years, and her busy examining schedule has included many tours to international venues. She is a Trainer and Moderator, and also undertakes examinations for the Jazz Syllabus and Diploma level candidates.

We use cookies on our website to give you the most relevant experience by remembering your preferences and repeat visits. By clicking “Accept”, you consent to the use of ALL the cookies.
Cookie settingsACCEPT
Manage consent

This website uses cookies to improve your experience while you navigate through the website. Out of these, the cookies that are categorized as necessary are stored on your browser as they are essential for the working of basic functionalities of the website. We also use third-party cookies that help us analyze and understand how you use this website. These cookies will be stored in your browser only with your consent. You also have the option to opt-out of these cookies. But opting out of some of these cookies may affect your browsing experience.
Necessary Always Enabled
Necessary cookies are absolutely essential for the website to function properly. These cookies ensure basic functionalities and security features of the website, anonymously.
Functional
Functional cookies help to perform certain functionalities like sharing the content of the website on social media platforms, collect feedbacks, and other third-party features.
Performance
Performance cookies are used to understand and analyze the key performance indexes of the website which helps in delivering a better user experience for the visitors.
Analytics
Analytical cookies are used to understand how visitors interact with the website. These cookies help provide information on metrics the number of visitors, bounce rate, traffic source, etc.
Advertisement
Advertisement cookies are used to provide visitors with relevant ads and marketing campaigns. These cookies track visitors across websites and collect information to provide customized ads.
Others
Other uncategorized cookies are those that are being analyzed and have not been classified into a category as yet.
SAVE & ACCEPT